Showing posts from December, 2021
Show All 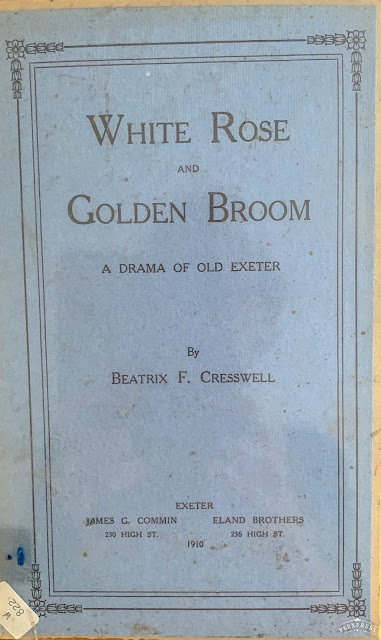 Part 3; White Rose and Golden Broom   (Read Part 1 and Part 2 ) 'He was taken to Taunton and accompanied the king as a prisoner on the triumphal march to Exeter where the monarch was welcomed with jubilation…Perkin's wife Katherine was fetched from St Michael's Mount. The king took a shine to her, and she was accepted into his court under the wing of the queen and eventually remarried. While she was in Exeter, Perkin was humiliated by being forced to repeat his confession in front of her …' ( Devon Perspectives). 'Perkin Warbeck, another pretender to Henry VII’s throne, was given a similar Tudor spin – an odd name, humble background, documented torture, beatings to the face – to paper over the strong possibility, backed by crowned heads across Europe, that he was the genuine Richard, Duke of York (the youngest of the princes in the Tower).'  ( British Heritage ) Cast of White Rose & Golden Broom C20 Coldridge links; Beatrix Cresswell ‘s Pageant ‘It is a
Post a Comment
Location: South West England 1 The Cloisters, Exeter EX1 1HS, UK
Read more 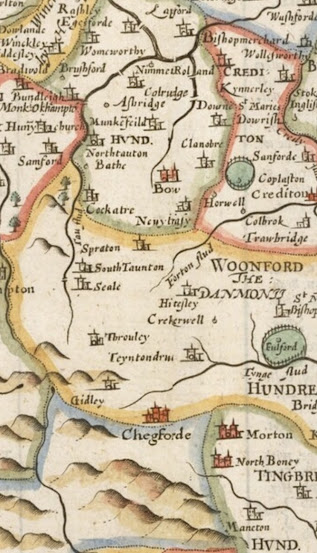 Old map showing 'Coldrudge', 'Afbridge'  and 'North Tauton '   Part Two      (See Part One  - Setting the Scene/s)      Through the Gateways          ... F ollowing the visit to  Coldridge I became distracted, the demands of writing new poems for a new sequence about 'Gateway' ancestors taken over by the more rigorous demands of research - snippets of information and names from the Coldridge mystery also fed into the peopled labyrinths of Devon’s late medieval early Tudor families, from whom I was sampling snippets about women's lives into my new sequence of poems. One of the women was Katherine de Affeton, who by now, following aeons of research, I had reason to believe may well have been one of our Sampson family's gateway many many times great grandmothers - through the lineage of Bartholomew Earland - whose marriage with Nan Cann had enticed me to visit Coldridge in the beginning. (See Post One) . In my last draft I'd left Ka
Post a Comment
Location: South West England Coldridge, Crediton EX17 6AS, UK
Read more
More posts